You can order DVDs by sending us an email (ericahoksbergen@hetnet.nl). We will send you the DVDs, and you will receive an invoice. Please remember to mention your home address and phone number.

All prices include costs of shipping.

The struggle. Suzanne on her adoption (2007) 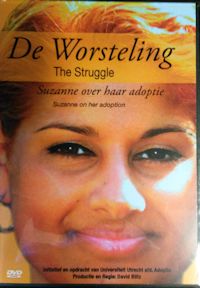 Suzanne Benne was born at the end of December 1979 in Bombay, India. She was abandoned and subsequently adopted in the Netherlands in 1980. Not long after her adoption father Rob and mother Pim got divorced. When Suzanne was twelve, she and her mother were filmed for the Dutch television. They had an emotional conversation about being adopted, about her hopes and fears.

Fourteen years later, Suzanne is 26 years old and looks back at this conversation and talks about her thoughts and feelings nowadays. Through discussions with Pim, Rob, brother Siebrand and partner Hugo we get to see Suzanne doing well in life, but still…not knowing her biological mom, probably never being able to find her, are themes that complicate her life.

This adoption film is very suitable for information meetings, discussion of adoption themes and therapeutic contacts. Adoptees and adoptive parents will recognise the subjects Suzanne is dealing with.